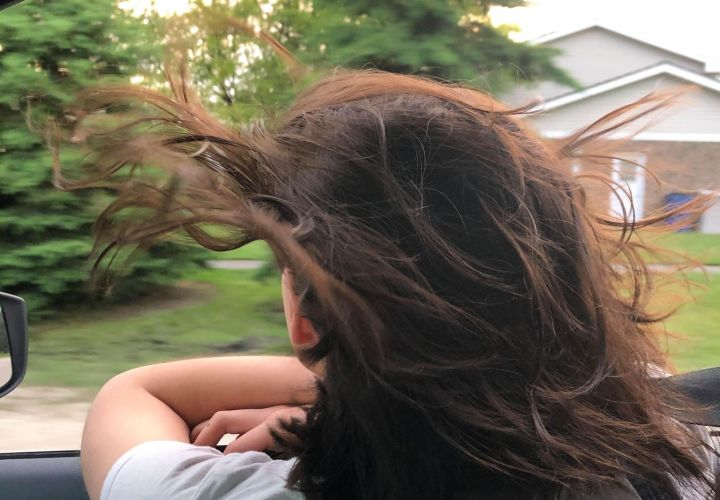 On Sunday, my boyfriend and I drove up to Minnesota to pick up some things from our dystopian college campus. Housing sent out an email early last week with the details: Do you live within a six hour driving distance between campus? Perfect! Get your masks and a packing buddy to sign up for your three hour time slot today. (Disclaimer: not a direct quote)

Of course New York is not exactly a six hour drive to Minnesota, but considering my lucky boyfriend lives 5 hours and 54 minutes away (I know) from that rural midwest town, and I’ve been quarantining with him for the past couple of months, we took a car and headed north.

Atlas has been a wonderful boyfriend and I feel lucky to have him in my life. He’s actually sleeping – sweating rather – right next to me at the moment, heavy breathing and laying on his stomach. I love him. How could I not? He is thoughtful, responsible, and witty with handsome, unthreatening, boyish features that top off his magnetic charm. He is the sort of boy people find difficult to dislike– that one irresistible person you meet at a party who you talk to all night and think about the whole way home. Hate and Atlas are two words that never come out in the same sentence.

That aside, he’s not perfect by any means, but having dated someone I spent a year fawning over who seemed like surface-level textbook perfection to me, Atlas is a nice relief from the consequences of dating the hot-and-he-totally-knows-it, manipulative dickhead. With Charlie (my ex), I spent our whole relationship catching up to him as his life sped ahead without me. He was– to some degree– a trophy wife, and yet my win didn’t feel genuine. There was always something missing because I never fully felt good enough for him. All while I was trying to understand the ins-and-outs of my relationship with Charlie, I’d stop by the room on the other side of Charlie’s wall for some help figuring things out. Atlas lived with my ex in his suite and we’d quickly become close friends. At the time– especially with problems concerning my then boyfriend– he became my biggest confidant.

The break-up wasn’t very messy. After having been sat down and essentially told he didn’t have feelings for me anymore, Charlie and I never really spoke again. If you want to read my fresh, teenage, post-breakup angst in a bittersweet blogpost check it here, but the point is Atlas remained a constant in my life despite Charlie’s absence. One thing led to another, and Atlas admitted his feelings for me a couple of weeks later. A few more weeks passed before I kissed him. Then we kissed again. And again. There was a lot of sex and feelings and resentment and excitement involved as I fought with myself over where to take my relationship with Charlie’s roommate. On the one hand, I had this wonderful boy who was everything I needed him to be: patient yet decisive, open-minded yet opinionated, ambitious yet focused. And on the other hand, I knew Atlas deserved someone who had already answered all of the difficult questions that were still happening in my head: Do I like Atlas as deeply as he likes me? Am I confident that a relationship with him is what I want, or am I only dating him because I feel like I owe him for the kiss? What would I be losing if this didn’t work out? And what about Charlie? What would he think? What tension would this cause between them? Am I even over him yet?

Because of how much I loved Atlas in my life, I wanted to be careful not to mistake those feelings for more than they were (or should have been) for both of our sakes. After all, once you cross that line, there’s no going back.

That being said, we were in dating limbo for four months. We were exclusively, label-lessly dating per the usual Gen-Z fashion, and I was content with getting closer to him at my own pace. Out of respect for him, I was always clear about where my head was at, and for the past three months we went from super private about dating to being pretty public about our relationship (which has– funny enough– made a certain Charlie E Stetson very unhappy). It’s been a loose seven months of dating overall, and considering the usual gross unhappiness that begins around month four hasn’t haunted my subconscious yet, I can confidently and passionately say that I’m crazy about him. However, (and I’m nervous to mention this because he reads this blog and we’ll inevitably have to talk about this) sometimes– but rarely– I wonder how contingent that is on our living situation. What obstacles would we have to face if the world contained more than just each other? How would things be different?

When we parked by Visscher Hall on Sunday, Atlas hopped out of the car immediately.

“I need to pee!” He screamed as the car door shut behind him and he ran off. Shortly after, I pulled the elastic straps of my mask around my ears and headed out myself, trailing along the path that led up to Visscher’s entrance in my lazy, mix-matched outfit (pink pajama pants, a grey t-shirt, and white high-heel boots). There was a pale blue car parked outside of the front doors. I squinted to look who was inside– a tall boy with what looked to be curly hair and glasses. A woman I assumed to be his mother sat in the driver’s seat, and both of them stared at me as I inched closer.

All of a sudden it felt difficult to breathe. C’mon! Seriously? What were the odds that Charlie had signed up to pick up his things the same time slot as Atlas and me? That was just my luck, I supposed. I didn’t know what to do or where to look or how to walk. I straightened my back in a way that seem poised but still casual– I couldn’t look like I was trying to hard. I was back to the same balancing act I performed for Charlie when we were together: effortless yet confident, perfect yet self-aware, dreamy yet grounded.

As I neared the car, I realized the boy staring at me wasn’t Charlie at all. It was one of Atlas’ friends who recognized me from afar. He waved to me through the window and with a laugh of relief and a mental facepalm I relaxed and waved back. Why was I so affected by the idea of Charlie sitting in that car? Why did I still seek his approval all these months later? I hadn’t felt that wave of insecurity for months and just one mistaken glance at a boy who looked similarly to my ex sent me back to November. I suppose he represented everything I wanted, had, and lost. Until I fully learn my self worth there will always be a small piece of me screaming “I wish I could have been enough for Charlie!” After all, I wasn’t enough. That’s not because I was ever particularly attached to him, but I was very much attached to the social status he represented. I felt like one of the cool kids when I was with him– the kind of girl people looked up to and wanted to be (or be with).

It made me wonder how steadily could my feelings for Atlas have increased with Charlie on the other side of a wall. An always-present obstacle. Pre-quarantine, Charlie caused a major rift between Atlas and me. It left Atlas feeling like he could never match up to the chalk outline of my ex-boyfriend, but my anxiety felt too confusing to explain before Atlas got stuck in “I’m not good enough” mode.

A couple of weeks ago, I asked my boyfriend what his first impression of me was. Curiously, I wondered what he initially thought of my relationship with his roommate. Atlas revealed that when he first met me, he wasn’t surprised I was Charlie’s girlfriend.

“I thought you were hot with really nice legs,” my boyfriend teased. “Way out of my league.”

I liked the idea of that– being “hot” and “out of people’s leagues”. I never imagined I would be that to someone, so knowing that Charlie succeeded in some fantasy of mine by lifting me up on his podium for others to envy gave me the addictive satisfaction of wish-fulfillment. That’s the thing though, it was never about being on the podium with Charlie. No– in fact it was never about Charlie at all. It was about being on a podium above everyone else. Charlie was a stand-in for the confidence I lacked. A twisted sugar-high that I inevitably had to come down from. So, although I’m over the boy, I’m still aching for all the good feelings. Pseudo-seeing Charlie in his car parked outside Vesscher was a relapse. All of a sudden I was looking up at him again, instead of standing by his side. Pull me back up, Charlie. I can be good enough for it this time.

Part of me believes quarantine is the reason why that urge has subsided. My social life doesn’t exist beyond the walls of my boyfriend’s house, so I don’t feel the need to impress anyone or worry about anything. I can be happy with Atlas without seeking others’ approval. Yet, I still want to be hot and feel like I’m out of people’s league. I want to be confident and aloof. Charlie was my quick, temporary fix, but maybe it’s time I look for something more permanent. I’ll never truly become those things until I stop focusing on becoming those things. Just take a deep breath and relax, Eloise. I may not be on a podium with Charlie, but I’m in a bed with Atlas, and that’s more than enough for me.